Barbers of the Lowcountry's

Book An Appointment in Beaufort Bill has been part of the Nelsen family for more than 30 years. They tried to recruit him as a new barber during much of that time. In 2015, Bill finally decided to become a barber and discovered a new passion for something he didn't think was possible. Bill is very artistic and takes great pride in his work. Delivering new looks for people is only a byproduct of being a barber. Bill's favorite part of being a barber is building client relationships. Bill has developed a great reputation as the barber for kids, as well! "They are the future of our country, and I take pride in making them smile," he says. I am originally from Darlington, SC and have been cutting hair since 2015. I love drawing, researching and anything in the country life. I enjoy going to the beach, learning about hair, hanging with friends and just learning about life. I get great satisfaction in seeing the clients face after they have been transformed by one of my cuts and styles. Working at Barbers of the Lowcountry as been one of my greatest accomplishments and its an experience of a lifetime. I was born and raised in Bluffton. I just graduated from the Lowcountry Barber college right here out of the Bluffton shop so I am still learning. I am excited about this new journey of Barbering. I love speaking with customers, talking sports and I love the atmosphere here at Barbers of the Lowcountry and the people I work with. In my spare time I enjoy hanging with my family, boating, golfing, playing video games and working out. I am also a new dad and my eyes light up every time I see my son. Nicki is a 20 year veteran in cutting hair. She brings a spunky style to the shop with a lot of skill. She loves her jeep and is excited to be apart of the BOTLC experience. 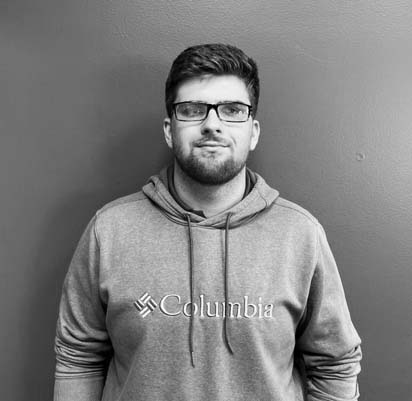 I am Bill Ricketts mother and I have been with Barbers of the Lowcountry for 2 years now. I love serving our clientele and working with my son. Jeff is one of our biggest fans. The guy in the green shirt... He was first a client and loved our culture so much he asked for a job. We jumped at the chance. He is always smiles and ready to help any guest who walks in.